Lessons from a 8 yr. old boy asking for an opportunity to shine 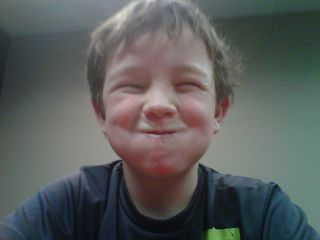 I leave to go to play basketball at 5:15am about 3-4 mornings a week and my 8 yr. old son Beau wakes up before 5am nearly every day and begs me to go.  Every time he asks if he can play and I have to tell him he can't because I'm afraid he'll get hurt.

Playing ability is not as much the issue.  He can dribble better than most of the guys out there on the court (through the legs, behind his back, etc. it's really quite entertaining to watch him) but I've held my ground to protect him.  He continues to get up and go with me and he consistently asks me if he can play (apparently he hasn't gained understanding what the word "No" means).

While we play I will gaze over and see him shooting the ball by himself and playing his own game with an imaginary competitor.  He shoots 3-pointers, lay-ups, and tries endless trick shots and behind the back passes to his teammate (aka "the wall).  During the game if he sees one of the guys get hurt or leave early he'll yell out "Dad, can I play?"  I have to protect him (I think to myself).

Today one of the guys had to leave right in the middle of the 3rd game to go to work. Beau was there with his youth ball under his arm and he was just looking at me.  I knew what he was thinking.  It seemed he knew what I was thinking. He asked to play with a sheepish grin. I paused as I looked at the other guys (who are all 2-3 times taller and heavier) and sized up the competition and said okay.

The game was about over and our team was down by 2 pts. I threw the ball in to one of the guys as 8 yr. old Beau streaked down the sideline with a grin from ear to ear. Our teammate passed the ball to Beau and without hesitation he stops well beyond the 3 pt. line and of course drains a 3 pointer to win the game.  Grown men are in shock and all smiling or laughing. Beau is ecstatic to get a high five from all the players and says "Thanks Dad for letting me play!"

The moral of the story?

1) He got up early and showed up when others didn't.

2) He was prepared and well practiced.

3) He never stopped asking for an opportunity to shine.

He's an amazing young boy and I'm proud to be his dad! I hope this story reminds you about some basic principles to achieving your goals.  You got to get up a little earlier and hang out with those who are doing what you want to do, prepare and practice more often (despite your current circumstances) and ask for more opportunities to shine!

This is only a preview. Your comment has not yet been posted.

The letters and numbers you entered did not match the image. Please try again.

As a final step before posting your comment, enter the letters and numbers you see in the image below. This prevents automated programs from posting comments.

Having trouble reading this image? View an alternate.

Comments are moderated, and will not appear until the author has approved them.

(Name is required. Email address will not be displayed with the comment.)